Recently on the CP

We’re already into the last month of the first quarter of the new year, and nothing has been posted here yet. That, however, doesn’t mean that I haven’t been quite busy. In fact, let me give you a rundown of my current projects, and stuff I have already finished this year: 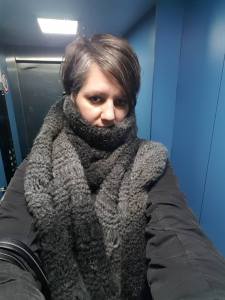 The first finished project of the year! And it almost didn’t happen! As you might (- and probably don’t, it’s alright!) remember, I got this huge and incredibly fluffy ball of yarn for my birthday last year. It’s called “Creative Big Moment” from Rico Design, and after looking through Ravelry for what people have made with one ball, I decided on the Airy Wrap by Civilknit.

Using 8 mm needles, this worked up extremely quickly – and as a plus, I learned how to drop loops in order to get this cool effect of “thread bars” for lack of a better way to describe it. It gives the wrap a sort of “woven” look, if you may.

However… it almost was not to be. I had this skein of yarn stowed away in my WIP basket along with several other ongoing projects for quite some time without touching it. When I pulled it out again, I almost had an insta-heart attack. Why? Yeah. Moth eggs.

The mohair was quite yummy, I guess? Damn, I started to do an angry yell-and-dance of sorts, ball of yarn in hand, cursing my life, and every insect that ever lived on this planet. What’s the purpose of insects, anyway – other than to gross me out, sting, bite – and fuck up your awesome wool??? (You guys – it’s barely March, and yesterday I was greeted with a GIANT turtle bug sitting on. My. Pillow. Like it owns that shit. Ugh! So many reasons why I love winter – and this is one of the main ones.)

Furious googling ensued – what’s to be done? I wasn’t about to give up my skein to the nasties without a good fight. The first thing I did was go out onto my terrace and beat the living bejeezus out of the skein and shake all eggs out of it. A (dead) adult moth or two fell out, and I really lost all hope of salvaging the yarn. So I started to unravel the skein from the outside, picking off eggs as I went… and – thankfully – soon realized that the damage really wasn’t bad at all. The eggs were only to be found in the outermost layers, where the thread was also significantly less fluffy than on the inside. I guess they had their feast on those fibers. I soon had everything picked off, and decided to use the yarn anyway, and give it a good wash once the wrap was finished. And that’s what I did – and I am very glad that I didn’t chuck out the whole skein in disgust, and dealt with the moth problem almost like an adult who has it all together. The wrap is extremely soft and very light, and has quickly turned into one of my favorite wraps for the remainder of this winter. 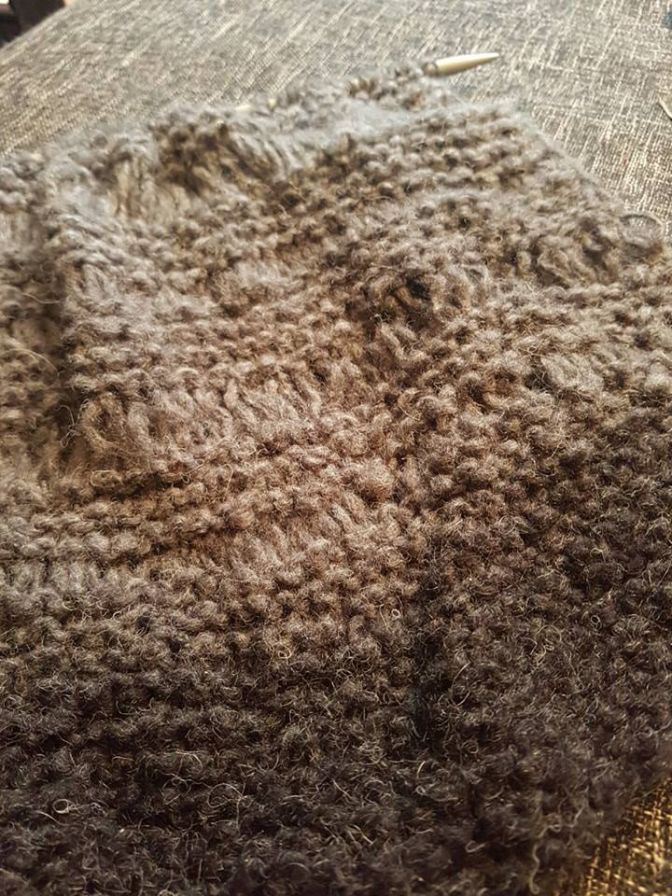 Interestingly enough: I haven’t observed any flying moths, in my apartment at all… or larvae… and the ones I found were dead. I am assuming the eggs were dried up as well. I have since put a bag of lavender (- handmade by my daughter in school) into my WIP basket and haven’t touched it since… I am kind of scared of what else I might find. Raveled here.

So why not show some of my daughter’s projects that she does in school here, as well? Check it out! I love the evenness of her stitches – and I love the smell of lavender. (And the moths? THEY HATES IT!!!) 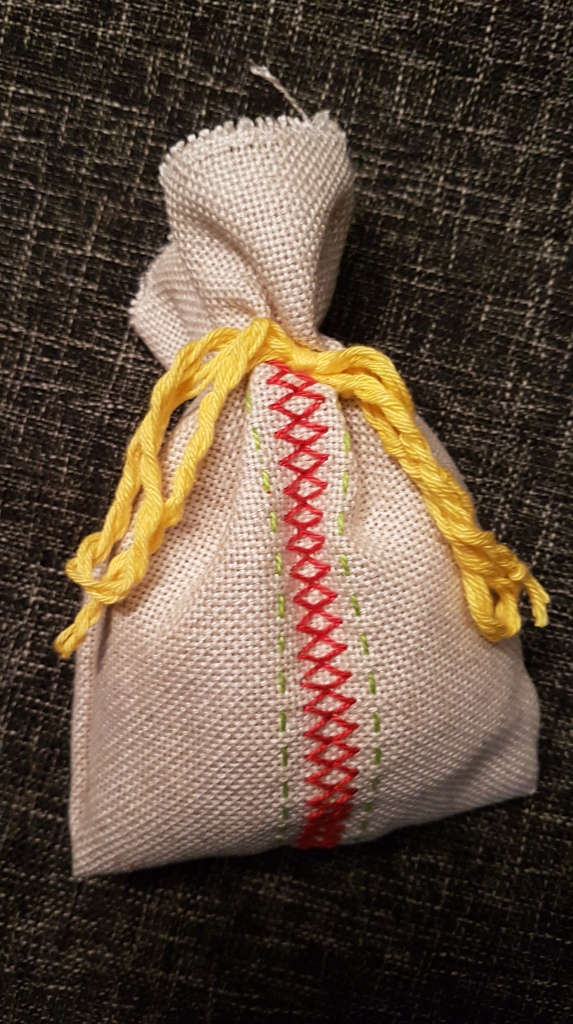 Another baby made it’s way into this world early in February. Actually, we’re talking about the sister of the recipient of this blanket. So I didn’t want to make another blanket… and started working on the sleeping bag sometime last summer already. The project was hibernating for some months, especially since Benjamin’s Blanket had top priority at the time. But I did finish, and with lots of time to spare – only some stubborn ends still had to be weaved in, and the buttons had to be sewed on, when the baby made her way into this world. I actually love this thing, and consider it one of my better knit-works. Not sure if it’s being used or not… but hey. Now I know how it’s done and the next one may just be around the corner. 🙂 The (German) pattern for this sleeping bag can be found here, by the way – and it’s actually not yet raveled, as I have just noticed! Shame! 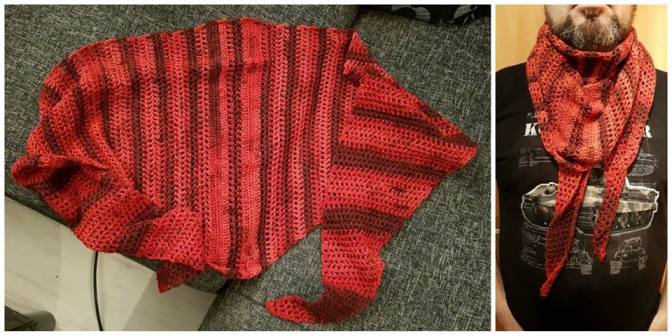 The ex was cold around the neck. So I delivered, cause that’s how we roll. This was a real quickie, actually, and fun to make. Took me only 3 days. I altered the pattern a tiny bit in the wide part of the scarf, but kept with it otherwise. He says he loves it, and it turned out just the way he wanted it to. The Desert Winds pattern can be found here, and my project is raveled here.

That’s it for finished projects for now… alas, there are 2 more projects I will talk about, that are keeping me really busy at the moment. To preface: I have discovered the beauty that are gradient yarns. They seem to be all the hype right now, and I wasn’t immune to them, either. Let me show you:

On the left: a hand-wrapped beauty called “Thundercloud” – how fitting a name is that? I got it from a local online store called Jacqueline’s kleines Wollstüberl – and after unwrapping it, I had to just touch it and look at it in awe for what seemed like forever, it was so beautiful and soft… and captivating to look at. And extremely reasonably priced as well – I can really recommend this store, if you live in the area and speak the language. Go check it out!

The one on the right I got from my mom in December. She picked out the color for me. Not necessarily what I would have picked for myself, but it really grew on me with the project I started to do with it, but more on that later. The brand “Woolly Hugs” is industrially mass-produced, and unfortunately you can really tell the difference, because there are quite some issues with the thread that I keep on running into as I go, which is more than annoying. It’s also significantly more expensive than the Thundercloud was – so I will probably not buy another one from this brand after I am finished with this one. Still, it works up into a beautiful scarf at the moment, and the bamboo needles work really well with this particular kind of yarn as well.

That said – I intended to work the Thundercloud into a Criss Cross, and I actually got quite somewhere with it: 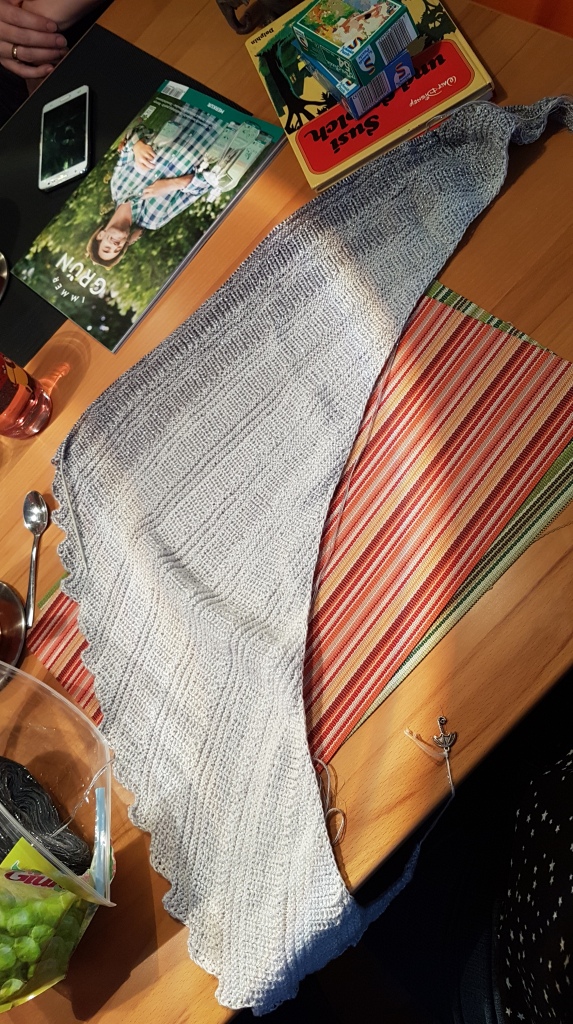 And then I decided to frog it – because I found the Musternixe – and isn’t this pattern ABSOLUTELY PERFECT for the Thundercloud? (Yes. It is. It is!!! And don’t tell me otherwise, because I just unraveled ALL OF THIS for it!!!)

I just thought – the perfect yarn deserves the perfect pattern… and whereas the Criss Cross is really, really nice looking, it isn’t quite perfect yet… and besides, the bigger it gets, the more tedious and boring the pattern gets to make. The Musternixe, at least, will not be repetitive, as it changes pattern with every color change until it’s done.

Which brings me to my biggest ongoing project:

This is a KAL (“knit-along”) hosted by Veronika Hug (- who is also the author of this book that I got) that started on January 10th, and – how fun – I got my mom to join in as well. She got herself a very nicely colored Woolly Hugs Cotton gradient yarn as well, and is in on the actiona with me. It’s a very nice mother-daughter thing to do, especially since we’ve spent a week of vacation together last month, both of us with our respective projects in tow. Those were some truly nice and peaceful evenings.

Alternatively, this KAL can also be worked as a (t)CAL (“Tunisian crochet-along”), which is something I tried, but have given up on rather quickly, which you will be able to see in the Facebook photo album I am going to link to beneath, instead of posting all these individual photos of our progress.

Here’s the album for a more detailed look at all the patterns:

I love this project – not because I think that the finished scarf will be particularly wearable (- getting quite too long already as it is), but because I am learning a TON about knitting that I never thought I would have the patience or skill to learn. Knitting complicated patterns has always been what I considered to be something like the ultimate master class, that I was light years away from… turns out: I’m not! I am actually really into this at the moment.

A new pattern is coming out about once every week, and you can find the instructions for them at Veronika Hug‘s website for both the knitted version, as well as the version done in Tunisian crochet, if that’s more your thing. There are German instruction videos, as well as written versions. You don’t actually need to be able to speak/understand German for either one of those, and they will remain online even after the KAL has been finished.

So that’s it for an update on the current goings-on… remind me to update my patterns page soon as well!

View all posts by Panta Rheia

One thought on “A Comprehensive Update on current Goings-on”